Whether you’re full-timing in your RV or on a weekend adventure, you’ll have to dump your tanks eventually. This process can be intimidating for new RVers, but it doesn’t have to be if you have the right gear. Camco makes excellent products that you can be confident will do a great job. Today we’ll compare the Rhinoflex vs Rhinoflex Extreme in a battle of the sewer hoses.

Camco is one of the most popular names in RV accessories. While they’re well-known for their various accessories, one of their best sellers is their line of sewer hoses.

The Rhinoflex and Rhinoflex Extreme are two of the most popular sewer hoses on the market. They’re both crafted from premium materials, the best that Camco offers. There are kits available with everything you need for dumping your tanks.

These sewer hoses are popular not just because of their name but because they do an incredible job. You want your sewer hose to work correctly when you use it, and the Rhinoflex and Rhinoflex Extreme do a great job.

When it comes to the Rhinoflex vs Rhinoflex Extreme, there are several things to consider. Let’s look at a few different categories to help us pick a winner.

The Rhinoflex and Rhinoflex Extreme are the most durable hoses that Camco has on the market. Sewer hoses are measured in mils to indicate the thickness of the plastic material used in construction.

Rhinoflex is made from 23 mils of polyolefin; many competing sewer hoses max out at 18 mils of thickness. The Rhinoflex, like many sewer hoses, is supported by a steel wire that spirals through its construction.

Where Rhinoflex Extreme separates itself from the pack is in durability. Rhinoflex Extreme is made from Thermoplastic Elastomer or TPE. This material is equivalent to 24 mils in thickness and includes a steel wire for reinforcement.

It’s a close call in our Rhinoflex vs Rhinoflex Extreme battle, but we’re chalking this one up as a win for the Rhinoflex Extreme. Durability isn’t the only thing to consider when looking for a sewer hose, and flexibility is necessary too.

When staying at campgrounds or regularly dumping at different locations, you never know what to expect when dumping. It often seems no two dump stations are created equal. What works for one campsite or dump station may not work at the next.

The Rhinoflex’s unique design allows the hose to retract and extend its length. The Rhinoflex can do all of this and easily hold the shape it is bent to. This is highly convenient to assist with height and angle differences from one campsite or dump station to another.

In our Rhinoflex vs Rhinoflex Extreme battle, we’re giving this one to Rhinoflex. We love the convenience it provides when expanding and contracting. Another thing to consider when selecting a sewer hose is portability.

You want a designated storage location for your RV’s sewer hoses. It could be in a plastic tote, a mounted sewer hose tube, or in your RVs bumper. This often requires sewer hoses to be compact to be easily stored.

They’re both equally impressive and compact designs, but we have to award this round to Rhinoflex. Measurements are facts, and facts don’t lie. We can’t make a decision based on a few inches; the price must be a consideration.

Like any item you buy for your RV, you want the best bang for your buck. You don’t want to spend your hard-earned money and toss the thing in the nearest dumpster a day or two later. We’re confident you won’t want to throw either of these products away, but let’s look at the price in our Rhinoflex vs Rhinoflex Extreme battle.

The scores are in, and we’re ready to hand out awards in our Rhinoflex vs. Rhinoflex Extreme battle. Let’s see who wins this battle. 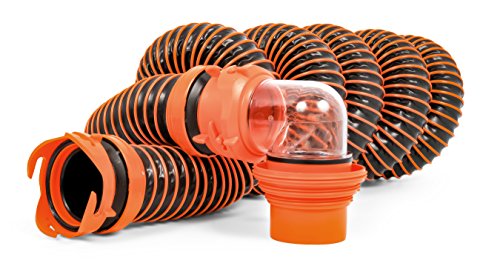 We would like to congratulate the Rhinoflex Extreme on winning the best overall sewer hose in today’s battle. The rigged exoskeleton protects the hose from damage, and the Thermoplastic Elastomer provides a pin-hole-resistant material. The only regret you’ll have when purchasing this sewer hose is you’ll regret not doing it sooner. 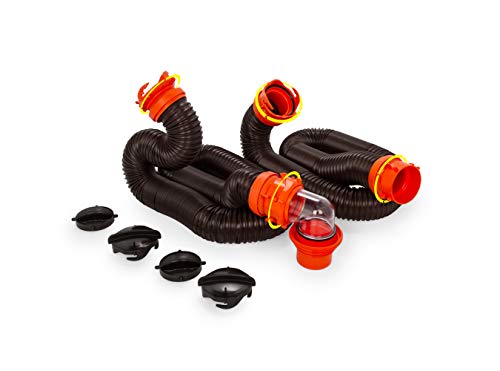 In such a tight contest between these two sewer hoses, we couldn’t go without giving the Rhinoflex an award as well. While we think the Rhinoflex Extreme is the best overall hose, the Rinoflex receives our Best for Portability award.

A 10-foot section compresses to an incredibly small 39 inches, a 67.5% decrease in size. You’ll easily store longer hoses with the space you’re saving, which will help you always be prepared at the campsite or dump station.

If you’re in the market for a new sewer hose, you can’t go wrong with either of these options. They’ll last for multiple camping seasons but also take your dump station stress away. Make sure you have the proper tools the next time you need to dump your RV’s tanks! What do you look for in a quality sewer hose? Let us know in the comments! How To Plan An RV Trip To All 50 States