Are Yamaha Generators Good for Camping?

With more campers seeking campsites in the wild, RV generators have taken on greater importance. Yamaha is one of the world’s best manufacturers. They create conventional and inverter generators for residential, business, and recreational uses. Travel trailer and fifth wheel owners favor Yamaha products. They are consistently reliable, produce less sound, and have better fuel efficiency.

Let’s see what ‘generates’ all this buzz about Yamaha!

Yamaha is a company with an amazingly varied product line. It started with building horribly out-of-tune reed organs, which is why the logo is made up of musical tuning forks, but quickly grew from there.

From instruments to electronic gear and audio equipment, this Japanese company has been at the forefront of innovation in many areas. It was not surprising when they ventured into outdoor sporting.

In 1958, Yamaha began its foray into building equipment with motors. It started with its lineup of street bikes, growing into the production of generators.

Yamaha is still cranking out generator inverters from Japan. They also have several models in their manufacturing lines in China.

After the Japanese tsunami, they began to diversify their production facilities. They moved some of their inventory lines, but they continue to create reliable generators.

Keep in Mind: We know generators can be annoying and loud. So Is There Such a Thing as a Quiet Generator?

Where Are Yamaha Generators Manufactured?

Yamaha has manufactured its generators in Japan for years. For almost fifty years, the company has consistently produced some of the most dependable and highest quality generators.

After the tsunami hit Japan in 2011, they decided to expand their company operations into other regions so that production wasn’t dependent on one source. This meant expansion into China for some of its generator lines.

What’s the Difference Between Conventional Generators and Inverter Generators?

Converter generators are robust gas-powered machines, that provide energy to run the equipment. They get their power from the generator’s alternator, but it can fluctuate. You might not want to use it for fragile electronic equipment.

An inverter generator runs power through an inverter. This changes it to AC electricity and produces ‘clean’ energy with a pure sine wave.

This is perfect equipment for using any item with a microprocessor, like a cell phone or laptop, because the power produced is steady.

These generators are also more compact and quieter than conventional generators.

With five popular products in the inverter generator lineup, Yamaha is sweeping the competition, providing a variety of machines to fit every need:

One of Yamaha’s smaller inverter generators, the EF2000ISV2, can produce up to 2000 watts of power. Because of its “Smart Throttle Technology,” it can work at top speed but makes little noise.

It also has better fuel efficiency than its conventional generator predecessor. It’s easily maneuverable at 44 lbs. It costs $995.

Yamaha designed the EF2200W with the RVer in mind. It has a carbon monoxide sensor built-in and an automatic shutoff.

When the sensor is activated, it stops for five minutes while carbon monoxide clears an area.

Consumers know it as the quietest inverter generator in its class, and it weighs 55 lbs. 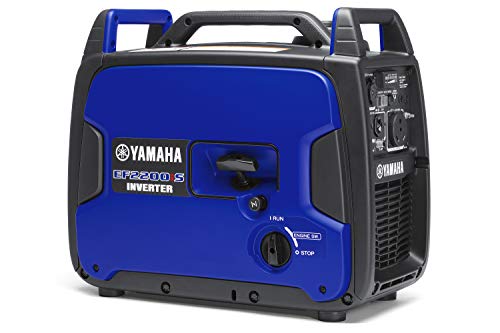 The EF3000ISEB inverter generator has boost technology. This surges extra power for equipment startups. It has 3000 watts, weighs 150 lbs, and will run a whopping 18.6 hours on one tank of gas.

As a result, this is the perfect generator for a big fifth wheel or travel trailer. It provides all the power needed at a whisper with Yamaha’s Quiet Technology.

If your RV is power-hungry, the EF4500ISE can take care of any task. Running an air conditioner, microwave, and more at once is a piece of cake. It has an electronic start with 19 hours of fuel time.

The Smart Throttle Technology keeps it quieter than any competitor. At 194 lbs, the 4,500-watt generator comes standard with wheels and an oil watch warning system. 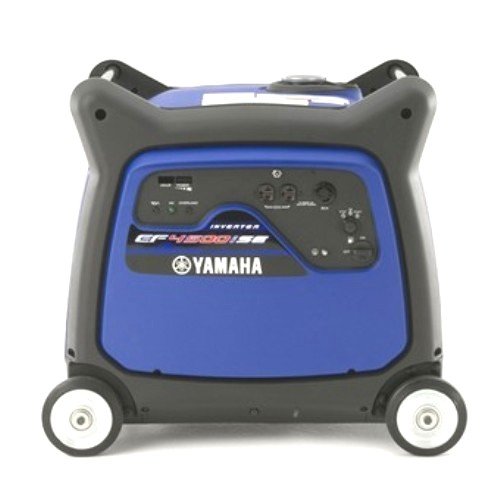 Pro Tip: Are you unsure of what size you need in a generator? Here’s an in-depth article to Know What Size You Need!

Another inverter generator, the EF6300ISDE, has 6,300 watts of power. It weighs 200 lbs, and benefits from its Smart Throttle, reducing noise and giving it greater fuel efficiency.

This engine can sip gas for 19 hours before you have to refuel. This model can run on 120-volt or 240-volt power. It has built-in wheels and an oil watch monitoring system. 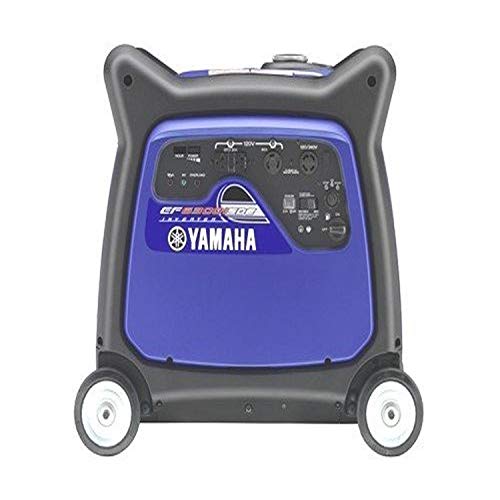 What Size Generator Do I Need for Camping?

Depending on how many appliances you plan to use at one time, the Yamaha EF3000ISEB may be all you need to make your boondocking camping trip a success.

With 3,000 watts, you can watch television, work on a laptop, and cook dinner in the microwave. If you enjoy gaming, running the air conditioner, refrigerator, and microwave at once, the EF4500ISE may be worth it.

You can go about your business for almost a full day before you need to feed the fuel tank.

Yamaha generators are great for their quiet profile due to the Smart Throttle Technology. They have noise block sound reduction and automatically adjusted engine speed.

As a result, Yamaha generators will run better with less noise and better fuel economy. Even the largest offering from Yamaha is only 56 to 64 decibels.

Yamaha Generators Are Great for Camping

With its Smart Throttle technology, quiet footprint, and gas-sipping ways, Yamaha generators have become the favorite power machine for RVers. They rival any built-in motorhome generator.

They are portable, making them useful at home and abroad. With the reputation of Yamaha behind them, you can rest assured that your generator will provide the power for all your camping needs.

Do you have a Yamaha generator? Everything You Need To Know About Fern Canyon Is There Such Thing as a Two-Story RV?