The Hughes Autoformer Power Watchdog 50 amp surge protector takes protecting your rig and gear to the next level. Not only does it prevent power surges from destroying your electronics, but it also has smart connectivity for you to monitor it while you’re away.

Having a good surge protector is essential to a safe RV trip; is it worth getting this fancy gadget? Let’s explore whether or not this unique, smart tool is right for you.

What Is the Hughes Power Watchdog 50 Amp? 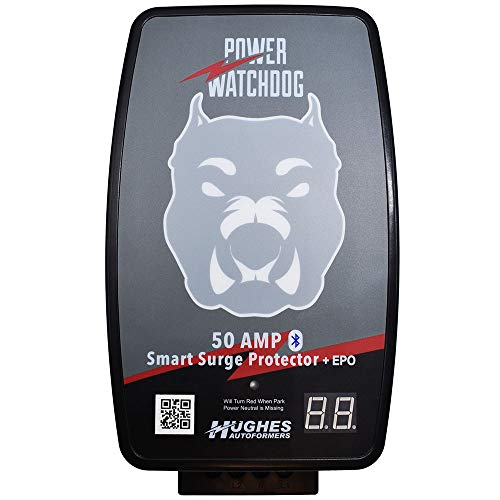 This product is considered the world’s first smart surge protector and surge guard with built-in Bluetooth connectivity. It can monitor your live park power conditions in real-time using an app on your smartphone or tablet. It will send text alerts whenever it detects possible dangers in your RV’s electrical system.

This powerful portable smart surge protector also offers 4,800 joules of advanced protection for your RV. And it comes with Emergency Power Off (EPO), which shuts down power if the voltage becomes too low or high.

It has a waterproof rating of IP65. It’s safe to use in the rugged outdoors, thanks to its rainproof design. Moreover, it also has an anti-theft locking bracket which adds a layer of security to your RV.

Meanwhile, the device measures 23in long, 10.5in wide, and 5in tall. It weighs 5lbs and is larger than most units in its category.

Its manufacturer also offers to replace a used upsurge model within the first two years after purchasing it. It’s also important to note that silicon dabs cover each capacitor to mitigate the vibration while driving.

Inside the package of the hardwired variant, they also added installation brackets, fasteners, and a user manual to aid with installation.

Why Every RVer Needs a Surge Protector

A surge protector can help prevent power surges from reaching your RV, which might occur because of a lightning storm or a power outage. An electricity surge would severely damage any appliance or computer equipment plugged into an outlet if a surge protector didn’t stop it.

Your major appliances can be the most difficult loss to bear. An RV’s fridge and air conditioner often have delicate circuitry, and a surge can fry their circuit boards. Since there’s no way of knowing when anything like this will happen, having a surge protector constantly monitoring for such events is the best way to prepare!

Our Favorite Features of the 50 Amp Power Watchdog

This unit has a universal fit with solid blades, copper plugs, and pure copper six-gauge wiring. Plus, its heavy-duty dog bone adapters are compatible with most cables.

It starts up quickly to protect your RV’s air conditioning and other appliances. Some noteworthy features of this surge protector include:

If you want to monitor your RV while away, choose the cellular/ wi-fi add-on option through rvwhisper.com. It’s a free Android and iOS app that lets you see kWh usage and other power monitoring data from wherever you are.

The intelligent surge protector also has numerous fault alerts such as miss-wired, open neutral, open circuit, and reverse polarity. So, if you’re dealing with a power problem, your surge protector might clue you in on the situation.

Very Short Delay After Plugging In

The Hughes Autoformers PWD50-EPO has a plug-and-play setup with just four seconds of power-on delay. When you consider that many other surge protectors at this strength have a two-minute delay or longer, this is an impressive component!

Surge protectors usually do a series of checks in the electrical system before sending power to your appliances. That way, if there’s a problem with the wiring, it can stop a surge.

The PWD50 only takes four seconds to do its checks and send power to your devices–a convenient perk for your RV adventures.

The device’s unique Emergency Power Off (EPO) feature constantly monitors your voltage and automatically shuts off the power when it goes beyond or below the threshold.

Whenever it detects a problem, the dog’s face on the box will light up red to indicate the issue. It will then display an error code in the bottom right corner. Aside from looking at your handheld device, you can check the side of the power watchdog for the list of error codes.

While the many advantages of this smart surge protector have caught our eye, there are a few things we don’t like about the Power Watchdog 50 amp Surge Protector. Here are the most notable ones.

One Amazon reviewer reported that the Bluetooth connectivity was very short but adequate for being inside and around the RV. If you plan to leave your RV for an extended period, however, you won’t be able to see the status of your surge protector.

This isn’t necessarily a huge deal since the surge protector doesn’t need the app to work properly. But if you want the peace of mind of being able to check your app, you’ll need the cellular data add-on through RV Whisper that enables you to check the status from anywhere.

Trending
9 Rudest Things You Can Do While Boondocking! Boondocking Etiquette

If the Hughes Autoformers PWD50-EPO Power Watchdog isn’t a good fit for your RV, you can try other alternatives that offer almost the same benefits like these:

Specs-wise it’s the same as its Hughes Autoformers power watchdog 50 amp. It even has Bluetooth connectivity and LED park power diagnostics.

However, this much cheaper version does not have the EPO feature, which means you’ll have to manually turn off the power during electrical surges. 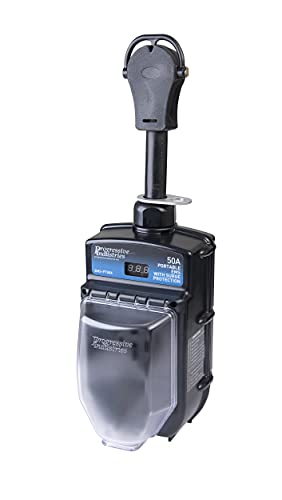 The Progressive Industries EMS-PT50X portable surge protector is quite similar to its rival from Hughes Autoformer. It’s weather-resistant and designed for outdoor use. These units can detect a wide range of electrical issues and automatically shut off power to your RV, in addition to offering excellent surge protection.

Should You Buy the PWD50-EPO Power Watchog?

Overall, just having the Hughes Autoformers PWD50-EPO Power Watchdog can give you peace of mind while RVing, even in the most remote campgrounds. It’s also much cheaper than replacing all the wiring and electronics in case of an electrical incident.

It has good ratings from its users, and it might be just what you’re looking for in a reliable, smart surge protector. How Does an RV Freshwater System Work?