Tips for Camping With a Dutch Oven

Cast iron cookware scares a lot of people. They don’t like how heavy the material is or they don’t like that they can’t use soap to clean it. But owning a Dutch oven can make your camping experience even more enjoyable.

Don’t be afraid of camping with a Dutch oven. This cookware provides opportunities for cooking all kinds of savory meals and baking delicious bread and desserts. Let’s learn more!

What Is a Dutch Oven?

A Dutch oven is a thick pot with a tight-fitting lid. It’s usually very heavy because it’s made of cast iron, although there are some aluminum or ceramic Dutch ovens.

Cast iron doesn’t conduct heat quickly but retains it very well. This is why it’s great for cooking over a campfire. You can cook soup or a stew and let it simmer for an hour. You could even put in a whole chicken.

What’s the Difference Between an Indoor and Outdoor Dutch Oven?

When purchasing a Dutch oven, it’s important to note if it’s for indoor or outdoor use. The indoor options are used in an oven or on the stove.

However, when camping with a Dutch oven, outdoor options are used over a campfire or on a bed of coal. They come with three or four legs, allowing the coals or fire to burn underneath.

These ovens also have a lip on the lid to hold coal once placed on top to cook the food at the top and bottom of the pot.

What Are the Pros of Camping With a Dutch Oven?

With a Dutch oven, you don’t have to have a cast iron skillet. You can sear, sauté, and brown in a Dutch oven without the splattering.

Camping with a Dutch oven is perfect for sitting around the campfire and relaxing with friends for the day. You can sit and have conversations while the food is simmering.

It’s not the fastest method to cook a meal while camping, but it makes you feel like you’re joining in an ancient campfire cooking method.

In addition to slow-cooking meals, a Dutch oven is great for baking. Never thought you’d be able to back an apple cobbler over a campfire? Think again!

Tips for Camping With a Dutch Oven

Cooking for the first time with a Dutch oven can be intimidating. They’re cumbersome.

Additionally, properly taking care of it and properly cooking the food inside it is essential to producing a delectable meal. But camping with a Dutch oven is worth the effort it takes.

Dutch ovens come in various sizes. A deep-sided one is perfect for stews and soups but not for baking bread. You’ll burn the bottom of the bread before the top gets browned.

However, when you want to cook a meal for six or eight people, a deep-sided Dutch oven is perfect for braising a chicken or heating up chili. 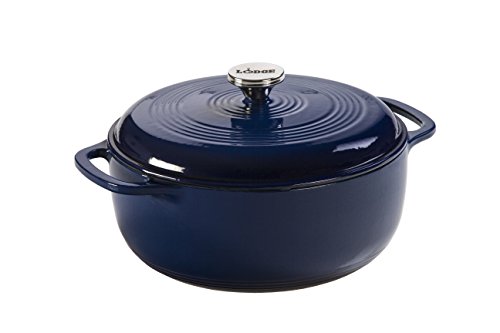 Sometimes manufacturers will pre-season their cast iron cookware. However, you always want to pre-season your cookware before and after each use. This prevents rust.

After cleaning the Dutch oven with warm water, dry it completely. Rub a small drop of flaxseed or grapeseed oil with a paper towel all over the Dutch oven. Bake the oven between 425 to 450 degrees for about an hour, then let it cool.

This seasoning process is essential to the longevity of your cast iron Dutch oven.

Outside temperature, charcoal type, oven depth, and food amount will affect the coal placement when camping with a Dutch oven. How you did it one weekend might differ from how you have to do it this weekend.

For example, a soup simmering at 400 degrees in a 10-inch oven may require about eight pieces of coal under the oven and 17 pieces on top of the lid.

However, baking bread at 350 degrees may only require seven pieces under the oven and 14 on top of the lid.

Keep Dutch Oven Off the Ground

You don’t want to sit your Dutch oven on the ground because the ground will steal the heat.

This is why outdoor Dutch ovens have legs. You can also place a fireproof barrier like a cast iron griddle or cookie sheet between the ground and the coals when camping with a Dutch oven.

Keep in Mind: Use your RV Outdoor Kitchen Like a Pro with these tips!

Like grilling, you want to constantly rotate the Dutch oven to ensure the food cooks evenly. On the grill, you’ll flip chicken or bacon over a few times or stir around vegetables.

You cook with a Dutch oven in the same manner. Buy a pair of heat-resistant gloves and keep turning the oven to reduce those hot or cold spots. 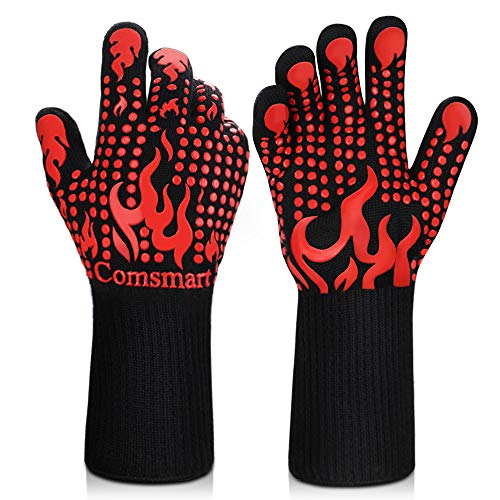 You’ll probably have to add coal. It won’t stay hot for the duration of the cooking time, especially if it’s an hour or longer. Fast-burning coal or windy conditions will require you to add it more often.

Keep checking the temperature to ensure the food is cooking correctly, and don’t wait until the coal goes out.

There are cast iron utensils specifically for skillets and Dutch ovens. Metal utensils will scrape the Dutch oven.

Ashes reduce heat, so you want to remove them while cooking to ensure the temperature remains hot.

If you’re cooking a chicken all day, this becomes especially important as you add coal. So use a whisk broom to remove the ashes as you replace the coal.

Use a Dutch Oven Liner When Baking

If you plan on baking a peach cobbler or cinnamon bread, use a Dutch oven liner. A liner makes it easier to lift the food out of the oven when it’s time to cool. It will also make the cleaning process a bit easier. 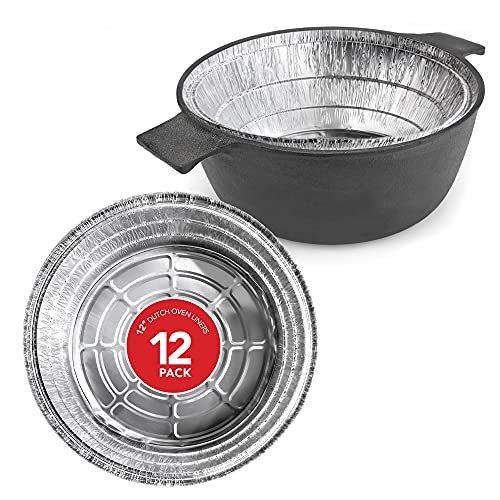 Don’t Use Soap to Clean Your Dutch Oven

A Dutch oven will last for decades if you clean it properly. However, soap is the enemy. If you have stuck-on food, fill it with water and bring it to a boil. Pour out the water and let the oven cool before wiping it down with a paper towel.

There are specific cast iron tools you can also use to remove stuck-on food. But you can’t use soap because that will remove the seasoning.

Keep in Mind: If there were an ultimate battle, griddle vs. grill, who would win? Let’s take a closer look!

What to Look for When Purchasing a Dutch Oven

Enjoying camping with a Dutch oven means purchasing the right kind of oven. Choose the right size to feed the number of people in your family. If it’s a large family, you won’t be able to choose a lightweight cast iron Dutch oven.

On the other hand, you’ll be better off choosing a different type of cookware if you need something for backpacking.

In addition, pay attention to the legs and handles. Will it be easy to use for the purposes you’ll be using it for? Check out the lid and make sure it fits snugly. You also want a lip on the lid to keep the coal from falling off.

Is a Dutch Oven Worth It?

If you want to go camping with a Dutch oven, you’re in good company. A cast iron Dutch oven is a favorite cookware item for many campers. You can hang around the campsite all day long, smelling savory soup while enjoying games and conversation.

And whether you’re tent camping or RVing, you can enjoy a delicious dinner with friends and family.

Have you ever used a Dutch oven? What’s your favorite recipe?